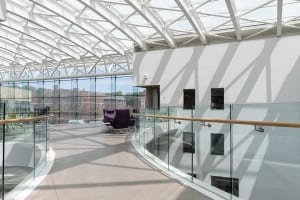 Where did the idea for this class come from?

This is an old idea in the sense that it’s something I wanted to do for a while. So, in some respects, this new class is deeply rooted in old-school Tepper/GSIA tradition which is, “Let’s look at business from its fundamentals.” That’s sort of the grounding philosophy of the old-timers that founded our school, such as Dick Cyert, Herb Simon. They charged into problems with a “I don’t know anything about this but I know some math, I know some stats, I’m just going to bring these tools to bear.” That’s the underpinnings of business science, which is go think about problems on a big scale that you haven’t done from your narrow area and see what you come up with. The second, more practical place that it comes from is that we need to engage undergrad students sooner with the cool and interesting problems we do here, not just in capstone. What doesn’t work so well is that we just send you to learn some math and statistics with the promise that somehow it’s all going to come together. That’s not just disheartening but hard to get organized. What you need to see is how these fields come together.

How did you decide what to include in the class?

Between you and me, it’s not create, it’s creating. This is a real-time production. I spent a lot of time thinking about this. The basic hierarchy of the class is to have these lenses of economics, organizational behavior, math (operations research), and marry that with thematic problems like we covered, like movies and micro transportation. I have twenty different thematic problems that we could possibly be covering, but what was hard through the summer was how to put the pieces in place. The normal way you teach a class was more like building blocks. Here’s the foundations, then you piece them together. It’s much more engineered. You lay blocks on top of each other, and the cherry on top is that we can solve this big problem. We don’t have time to do that because we want to cover such scope. What has been a challenge (and we’re doing trial by error) is laying the bare minimum of grounding so that we can work on a cool problem. So, what we want to do is build people up really quickly to get them up to a cool problem. It is just to provide the scaffolding and then the other pieces of your education snap on.

What do you want students to take away from this class?

I think the overarching thing is that business problems are cool, rich, intellectual-meaty things to do, that business as a science is something you can do. The problems here are important in the sense that business touches society in a transformative way. The goal is not to get a job. The goal is to have a rich and meaningful career, and that comes out of business. You don’t necessarily get that from, “Here’s what accounting is, here’s what marketing is, here’s what finance is.” The second goal is to give everybody this grounding so that everything you do on campus has a thread back to this class. I don’t know if I can achieve these goals, but everybody will be off taking something and they will learn cool stuff in statistics, biology, and a bunch of classes I can’t even think of. These classes will be drawing threads to be decision problems, calculating probabilities, inventory problems, either at the problem level or the industry level.

Your class teaches advanced concepts like dynamic programming, R, etc. You mentioned that one of goals of introducing these concepts early to students. What are some of the advantages of getting these concepts out there early?

One of the things that is frustrating about high level pitches like “What do CEOs think about?” is that it’s interesting, but we can’t do anything with that information. We want to be able to open a spreadsheet, bang some numbers out, and come to conclusions. That’s tied to understanding the cool and rich problems we have. Just telling people about them doesn’t get anybody motivated. You don’t think a cool tool is cool unless you have a need for it. Part of the goal is to get exposure to all those cool problems. The other thing is that students are different now than students were a couple of years ago. Students coming out of high school have way more exposure. A big chunk of the class has taken computing classes or advanced algorithm classes. We could charge people out of the gate and for the people where R is their fourth language, we could get them up and running with a little bit of Google and off they can go. For those who did for instance AP History instead of AP Calculus, their rich understanding of the Industrial Revolution is different of learning R. The goal is to get everybody up and running at a similar pace.

The course will look quite different because keeping it fresh is important. I don’t know how much the course will change. Some stuff works, some stuff doesn’t, so there’ll be content that comes in and out. The parts I’ve liked is seeing these threads through: how to calculate expected values, how to use them in a dynamic context, where probabilities come from. Being able to see that full picture has been really helpful. I think what might be helpful for future students is a better feel for the pace. The one area we don’t have enough of is resources, so you can tell your future colleagues how hard it was charging through an unpaved path. It’s tricky because there’s no textbooks out there about this kind of content.

If you could describe business science as a class in one sentence, what would that sentence be?

I like the two axioms in the syllabus, although they’re not exactly one sentence. The first axiom is “Business problems are not just business.” We’re seeing that when we talk about statistics and history, there’s all kinds of problems that’s coming outside of business. The other axiom is “All problems are business.” All the big things that are going around society flow through business. Business at the center of things is what business science is about.