Once again, we had all of BRGR to ourselves for Tepper’s Halloween Party! We had the dance floor and bar on the first floor and food on the second floor. The DJ was awesome and played GREAT music ranging from 90’s to present day hits all night long. The burgers were DELICIOUS! I decided not to eat anything before the party because I had heard from people last year how good the food was; let’s just say I made a wise decision 😀  Honestly, the food at the Halloween Party is by far the best food at any Tepper event.

There were a lot of awesome costumes. I was Xena Warrior Princess (but kept being confused for Wonder Woman), we had a comfortably dressed sleep walker, Thor, BB-8, a ninja, a dark unicorn, Emmanuel Macron, Eleven (Stranger Things), Tony Romo, and even the Fresh Prince of Bel Air! 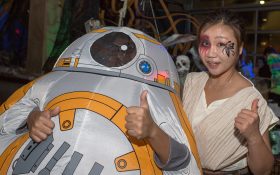 Although people were slow to get on the dance floor, the Halloween Party did not disappoint. As soon as the DJ played the Cha Cha Slide, everyone crowded the dance floor and it was packed until midnight. Even then, it was too early for the night to be over so we moved over to our next favorite spot, Urban Tap, where we continued the drinking, dancing, and conversations until 2 am!

Despite the rain and cold weather, the night was a blast. I’m glad I did not miss out on the Halloween Party this year. For the first years who did miss out because of treks, make sure you go to the Halloween party next year! These are memories you don’t want to miss in your Tepper experience.