Thanksgiving is a wonderful time of year here at Carnegie Mellon; it is truly one of the times that exemplifies our motto, my heart is in the work. Final exams are coming up, final projects are due, and the stress that you’re not doing enough with your life sets in. But, I would argue it is the most wonderful time of the year: unnecessary shopping becomes justifiable on Black Friday, you can wear cozy socks because why not, and you get to play Christmas music 24/7. This year, unlike most, I decided not to go home to North Carolina for Thanksgiving. Flights were overpriced, finals are coming up in two weeks, and I had a major term project to work on, so I decided to stay in Pittsburgh. As break approached, I was excited to finally have a few days where I could work on my projects and long-term goals uninterrupted.

Being from North Carolina, I am not used to every day being in the 30s and I was starting to wish I went home. At this point, I’d have to fly out the next day and spend nearly a thousand dollars on a ticket to go home — something I was not willing to do. But, Google Flights had other ideas for me: a flight to Miami was comparatively very cheap. So, 8 hours later my alarm went off and I was headed to the airport.

Just a few hours after that, I was stepping out of my Uber and walking right onto the beach. Being in warm weather for the first time in a while took some adjusting, but the radiant beams of the sun felt amazing on my skin. I sat on the beach for a few hours and checked into my hotel whenever it was ready. I brought my laptop everywhere I went and slowly made progress on the goals I had set for Thanksgiving break.

The next day I did the exact same thing until I had to catch my evening flight back to Pittsburgh. Stepping out of the airport wearing a puffer jacket and pants did make me quite disappointed, but I would say I had a successful break: I accomplished all my goals, I got tan, I listened to Christmas music, and I was back in Pittsburgh in time to do Black Friday shopping. 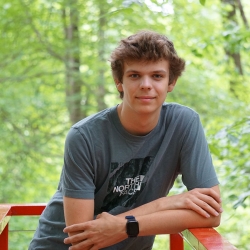 Evan Pinnix | Undergraduate Business 2026
Evan is a first-year Tepper student from Raleigh, North Carolina. He has a strong interest in entrepreneurship, as well as consulting in operations and management. In his free time, you’ll find him exploring food spots in downtown Pittsburgh, working out in the Tepper Quad gym, or enlightening a stranger that pineapple does belong on pizza.

What does it mean to be on your MBA journey? 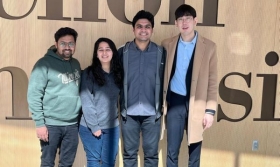