We live in a guideline-driven world.

It makes sense. We’re constrained by our information processing capabilities, our time, and our energy. Tools like hard-and-fast rules help us make decisions efficiently. They give us a sense of structure in an otherwise unmanageable sea of chaos. They exist for a good-enough reason: they highlight a general trend that enough people fit in.

It’s fair to say that a group of people create a certain trend. But what happens when an individual — or a large number of individuals — don’t fit inside this certain trend?

A perfect correlation hardly exists in the natural world, but…

Let’s take social factors out of the equation for a second. If you see a scatterplot with a line of best fit, it’s easy to recognize the line of best fit as just that: a line of best fit. The line’s not meant to connect the dots in a perfectly straight line. It probably won’t touch every single point. It just demonstrates a general trend.

Similarly, a lot of people find themselves taking four years to finish their undergraduate education straight after high school. Some even take less time. However, four years is not a limit. Some might need extra time to figure out what they want to pursue. Some might need time off to recalibrate. Whatever the reason is, it does not devalue your efforts or undermine your successes.

“Yeah, I’ll have to take an extra semester.”

When I tossed my blue high school graduation cap in 2016, I was so sure that I would toss a black one in the spring of 2020. I had done everything “right” and was confident I would continue to do so. If I could go back in time and tell that version of me, “no, you’ll change your major senior year and take an extra semester of school,” I can’t imagine that encounter would go well. Thankfully, I won’t have that confrontation, but I still have to come to terms with this change in educational plans.

In the grand scheme of things, staying one semester to take two courses is a small sliver of my life. Could I have continued my previous major in business administration and graduated in May 2020? Yep. But I would’ve been miserable and catapulted myself into a job that exists to solely pay the bills and burn me out. What would I rather have: prolong my college education by a few months or put myself on a career path I want to get off of?

Looking back, I was really the only one putting myself down for needing extra time. My parents, although (understandably) wary, supported my decision. My now-official primary advisor gave me the tools to shift gears and earn my degree. None of my friends saw or treated me differently; they actually applauded my change and wished me the best. Even with this external support, I felt like I was doing college “wrong” and failed.

My mother told me something along the lines of wondering what would have happened if I was encouraged to switch majors when I first seriously considered it. I would’ve easily graduated on time. My QPA would’ve been higher and my college experience would’ve been less stressful. Maybe I would’ve had an easier time with job searching. However, I found myself confidently interjecting that I was thankful for this different journey.

I try to integrate a statement one of my favorite teachers in high school told me: “there’s no such thing as ‘bad knowledge.'” Unpleasant or uncomfortable? Sure. But “bad”? No. It doesn’t matter if the piece of information isn’t used to make a decision. What does is that welcoming the possibility of facts entering can make the opportunity for more informed decisions.

It’s easy to think that the classes not contributing to my newly-declared major were a “waste”. However, I’m trying to turn them into assets. If I switched my major earlier, I would’ve missed out . I might not need to know how to read balance sheets for my career, but taking finance taught me (a) I don’t want a career in finance and (b) technical skills I can demonstrate.

Even outside the scope of skills and résumés, I’m thankful for extending my college experience. This extra time is letting me pursue on-campus projects that I wouldn’t have if I graduated “on-time”. I get to be the Forum editor for The Tartan another calendar year. I’m a bit sad that I won’t be able to graduate along with the friends I made in Orientation week. However, this extra semester gives me the chance to strengthening the connections I have made since.

I’m privileged to not only receive education in a prestigious university but also do so at my own pace and under my own terms. Although I hope that sharing my personal coming-to-terms with graduating late helps someone in a similar place, I want to extend this post to show support for anyone unsure of their timeline. Perhaps you need to take a semester or two off. Maybe you have a bit of trouble hearing back from a summer internship. Maybe you block off summer for time off instead of an internship. Whatever the case, let the guideline of a four-year undergraduate education be just that: a guideline. If it doesn’t fulfill your needs, don’t force yourself into it. 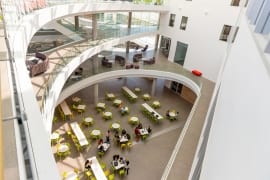 Plan with Me: Week 3
Scroll to top