“Why would you change your major in your senior year?”

That’s the first question I hear when I tell people about my major, but I can’t blame them. It’s odd. I was so close to getting my B.S., so why would I be switching right in front of the finish line?

The answer is quite simple, actually: I felt too scared to change.

Change can be scary. My parents encouraged me to be passionate in my studies, but the thought of pursuing a career in writing was daunting. A degree in business seemed secure. The path seemed way more straightforward. Graduate. Get a six-figure salary job within the next five years. Work a 9 to 5 or work hard/play hard in Silicon Valley. Work until I retire. Simple enough.

As much as I wanted that, I found myself dreading that life. I had an inkling of an idea that I didn’t want to dive head-first into business, but I didn’t know what I could realistically do. I was in a prestigious program that basically would catapult me to the American dream. Still, I told myself that I could work towards that goal and make it through the program.

At first, I couldn’t understand why I felt so uninspired and… dull, to say the least. I then reflected on a common question people asked me: “what do you want to do after graduating?”

My response, without fail: “If I had no chance of failing, journalism.”

More recently, I attended a social gathering for the Newman Club (an organization geared towards college Catholics in Pittsburgh). Although it was supposed to be an event geared mostly towards freshmen who just landed on the mysterious land of Carnegie Mellon, I could not resist the opportunity to get free gelato from Mercurio’s (the club got me by luring me with free brownies!).

As I got my scoop of pistachio gelato, I started chatting. Most of the people there were freshmen. Whenever I was asked what my major was, I would tell them “business, minoring in writing, but if college was a feverish dream and I woke up as a freshman, I would switch the two in a heartbeat.”

What stopped me from making that change earlier if I felt so strongly to tell strangers that? I later boiled the answer down to one word: fear. I feared to step outside of expectations or to face disappointment, ridicule, or any other sort of judgment.

That’s probably more information than the freshmen wanted to hear. Still, I would have given anything to go back in time, slap the freshman version of myself who was questioning switching over to writing, and ask her “what are you so afraid of?” I felt like my testimony could save someone from being stuck on a path that they hated only to find it to be too late.

Let me take a step back a bit. Would it be preferable for my college experience to have been a fever dream so that I could have been in courses I felt passionate about from the start? Of course. Unfortunately, it’s no longer the Spring 2017 semester. I can’t undo the three years I spent convincing myself “this is what I have to do with my life!” and “this is my passion!” I loved to spit out Andrew Carnegie’s “my heart is in the work,” but was it ever?

To put simply: not quite.

I ran to my academic advisor for my minor in the English department. She had her fair share of apprehension. Changing so late might not work, and if it did, I would have to stay in school for another semester. The upcoming semesters would be packed without much room, if any, for electives.

That’s when it hit me; my writing courses all felt like electives. I realized I hardly looked at the clock in those classes and was much more absorbed in the content. My grades reflected my interests. Taking a full courseload of purely major-related courses is stressful, sure, but I wasn’t dreading it. In fact, I was excited.

Surprisingly, my parents were supportive. My parents were also apprehensive about this switch. A B.S. in business has such prestige and almost foolproof. A degree in writing? Maybe I might land lucky with an incredible gig as a journalist, but they feared I would be in a thankless or underpaid (or both) job and regret changing.

I understand it. I really do. Even before I told my parents, I feared I would regret this decision. Whenever the thought of changing my major came up, I would suppress it. I would tell myself that I was in a prestigious business program and to transfer would be to discard an opportunity of a lifetime. Maybe I could adopt writing as my hobby, but adopting it as a career? Off-limits.

I meditated on this fear. Why was I scared of this? Flip the tables; I could regret not switching. Why did this not scare me?

The more time went on, I realized which force pulled the strongest: my passion for writing. Although I felt like a failure for “quitting” or “failing” to complete my B.S., I learned to accept that I tried my best to pursue business. I showed my perseverance over the years of staying in the program. By recognizing what I want and need out of my life, I took control over it. My thoughts on what others want from me didn’t control my decisions; I did.

“What a power move!” a friend I made in Tepper joked when I told her I was changing so late. She is anything but judgmental, yet I feared her judgment. I told more friends (mostly because we became used to having the same classes), and many of them showed excitement. I’m finally doing something that excites me. My mother told me that I showed strength and independence by claiming my own voice, something she admired. My parents aren’t the kind of people to hold back, so I felt a bit of doubt chip away.

Am I jumping out of bed every morning? Of course not. That’s not life, and I never expected changing my major to “cure” my feelings of loneliness or struggles with mental health (which I have spoken about in previous posts!). Still, running up an escalator going down didn’t help my cause.

Do I love every second of every assignment now? Also no; that’s life. But do I love the program I’m in? Yes. I finally feel like I belong and in an environment where I can focus not only on doing well on the exam but also wanting to learn.

Despite the turmoil, I don’t think I even regret taking this long to change. In a perfect world, I would finish college within four years. But why am I forcing myself to conform to the average undergraduate length? At the end of the day, Tepper gave me a valuable set of skills that I don’t doubt I will use. I made plenty of lifelong friends and met professors who cared for me and helped me grow inside and outside of the classroom. I needed this lesson to teach me to pursue my passions and goals.

Now, my heart is truly in the work.

My Journey to Tepper 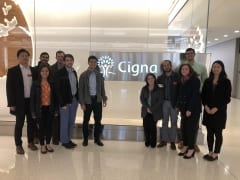