When I came to CMU, I heard about this class, 15-112: Fundamentals of Programming and Computer Science. Infamous for its workload and the stress it generated, I believed that I would never take the class, even though it also enjoyed the title of one of the most useful classes in the University. Eventually, after nearly a semester of hearing others praise (and complain about) the class, I enrolled in it in my freshman spring.

Immediately, I felt out of my league. I had never coded before, and I failed to understand a print statement. Although I managed to obtain A’s on my assignments and assessments, I was spending more than twenty hours a week on the course. Moreover, I was suffering from a lack of sleep, nightmares about Python when I managed to sleep, and general unhappiness. After three weeks, I walked into the professor’s office and explained my issues, informing him of my decision to drop to 15-110: Principles of Computing. Although he assured me that I would likely be able to secure an A were I to continue in my current state, I too highly valued my health and well-being to do so.

I then dropped to 110, and life became much easier. I learned superficially about a variety of computer science topics, but, more importantly, I learned how to translate my thoughts into code.

Although I didn’t understand it at the time, 112 aims to teach problem-solving skills rather than solely coding. My initial difficulty with the course stemmed from my inability to translate my problem-solving thought processes into code, which magnified the struggle of telling the computer how to solve the problem.

After the spring semester, I returned to 112 in the fall, filled with confidence in my ability to translate English into Python but terrified of the class once again due to my previous ordeal. However, I thrived in the course my second time around: I spent far less than the average time on assignments, found quizzes and exams rather easy, made a great many friends in recitation and office hours, and grew to love the material and problems. As the semester progressed, my love for the class, starting at startled fear, increased such that my heart turned blue, the color of the apparel worn by the staff, and I wanted to become a 112 TA. Along with desire came motivation from one of my recitation TAs, so I applied to the position.

While I maintained confidence in my understanding of the material and my ability to teach, as I had taught math, Spanish, piano, and violin to individuals and groups in high school, I worried about my chances of success, for it seemed that everyone earning an A was applying as well. However, I performed so well in my interviews that, out of 100 applicants, I was one of eight selected to join. The day I received that message, I couldn’t believe it. Having endured a miserable experience and dropped to 110 the previous semester, I never thought that I would one day earn the chance to don the blue sweatshirt, but there it sat before me, the email from the professor inviting me to take up the hood and bear the dragon.

I now wear my 112 apparel almost every day. My friends, family, and professors all recognize it as my second skin, one so attached to me that they sometimes wonder why I haven’t worn it.

My heart has turned blue, and it now reads, “Hello, world.” 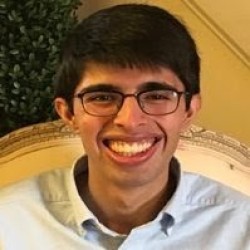 Rahul Ahuja | Undergraduate Business 2020
Undergraduate Teaching Assistant at 15-112: Fundamentals of Programming and Computer Science
Rahul loves balance, in life, in academics, in work. He works toward long-term goals and practices the ideal of Carpe Diem. Every day consists of pursuing A’s and careers, practicing music and yoga, reading, exercising, teaching, and getting enough sleep.

Exploring the Running Scene in Pittsburgh 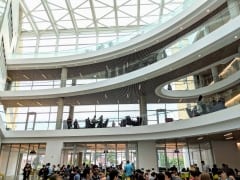 Note to Future Self: BaseCamp
Scroll to top