Fear of missing out (FOMO) is real. Life is so short, and we want to cram as much as we can in the limited time we have. We make heat-of-the-moment decisions. We crack under pressure (specifically, time pressure). We want to be in everything we can: parties, hangouts, get-togethers, Deans List, everything.

What’s the worst that can happen? In reality, the answer is usually nothing. Nobody really expects one person to take on the world or do everything. People have our limits. Some may be able to handle more than what you can, but that doesn’t matter. What you should ask yourself is the following: “what can I handle?”

Freshman year, one of my biggest regrets was not leaving my comfort zone more. I was hesitant to form stronger bonds with my friends. Not having hung out a lot in high school, I expected college to be the same. However, I came to realize that high school and college are, in my experiences, worlds apart. Perhaps it’s because I grew up in suburban Alabama and attend college in urban Pennsylvania. Maybe we mature between high school and college. There are a lot more possible factors, but it took me a while to realize that I could have fun having dinner or shopping trips with friends now and then.

Sophomore year hit, and I wanted it all. I was an active member of The Tartan, writing nearly every week. I wanted to move up to become the editor for Forum, the editorial section. I had an ambition to either double major in psychology or double minor in professional writing and international politics and relations (which I ended up choosing the latter). I promised myself to spend more time with friends and just say “yes” to things. Coffee date? Yes. Study session? Yes. Movie nights? Heck yes. I didn’t want to have the kind of regrets I had from freshman year; I didn’t want to wonder “what if I did…?”

Unfortunately, I developed a new kind of regret: not knowing how to say “no”.

I developed FOMO. I felt how missing out on opportunities could hurt and wanted to erase any regret. Even when my body and my brain told me to take a break and say “no” to an invitation, I wanted to push through in fear I would regret taking a night off for myself. Unfortunately, I became a victim of burnout. As bad as that was, it made me realize the cycle I was trapped in. I needed to realize that basically everything in life has the possible risk of being the host of regret. I could regret not going to an event, but by the same logic, I could regret going to it. I needed to stop fear and regret from dictating my decisions. Instead, I needed to put emotion in the passenger seat and let weighing pros and cons take the wheel, at least more than I allowed it.

I’m still trying to expand my comfort zone every day, some ways smaller or bigger than others. It might be something as small as trying a new color of a makeup product or tasting a new Starbucks drink. It might be something as big as becoming assistant editor of Forum and dedicating every Sunday to production. Regardless of what the step may be, I need to realize that life is compiled of fleeting moments. Sure, I may miss an opportunity to do one specific thing, but there are so many more possibilities waiting. 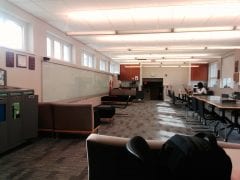