Earlier in the semester, I was in a rush to get to Sapna (which I wrote about here). I was planning on walking over to the Soldiers and Sailors Memorial, but I only had time to get a Lyft ride. I hurriedly ran into the cab expecting a quick drive to the performance, but what I got was so much more.

The driver and I made some small talk. He soon asked me what school I attend, to which I told him “CMU”. He then told me something I cannot help but think about:

“You are a lucky girl.” I nodded enthusiastically in agreement.

He continued to tell me about a rider who also went to CMU but had a much different reaction. He sulked and complained about how much he hated the school. The driver then recalled how he told his customer how lucky he was to attend such a college: so much so that the student left the car and said, “you’re right. I’m going to start enjoying CMU now.”

I grew up to be ambitious and not settle. However, I also grew up to be thankful for everything I had in life. Having gratitude for what I currently have does not mean I cannot chase after getting more out of life and vice versa. The list of things I took for granted was overwhelmingly long: the luxury of attending my dream school, unconditional support from loved ones, and pursuing what I love to study, to name a few.

I wanted to find a way to make myself more cognizant of what I already had in life and accept each day as the gift that it is. As a writer, I love to write things down to reinforce it in my head. I then decided to write down things I was thankful for. Turns out, there was an app for that on the App Store (Five Minute Journal), but seeing it cost money, I decided to  instead use up one of my half-used journals (finally, a way for me to start my day with positive energy and use up my half-finished journals!).

Every morning, I try to dedicate about five minutes to think about things three things I am thankful for and three things I want to accomplish in the day. I found that this was time I would normally spend on waiting for my morning coffee or scroll through Instagram; I might as well spend a little “me” time and do some mindfulness.

Similarly, in the evening, I try to dedicate five minutes to recollect three good things from my day and something I could change to make tomorrow better. Maybe I procrastinated a bit more than I planned. Perhaps I didn’t study enough for a quiz and didn’t get a grade I wanted. Regardless of whatever it may have been, this system has allowed me to take in my mistakes and see how to improve myself for the next day instead of letting it build into guilt. This was time I normally spent on late-night Internet surfing anyways; if I’m going to spend some time on my phone, I at least want to spend that time filling my head with positive thoughts.

Especially in a school like Carnegie Mellon where everything is so fast-paced and everyone appears to constantly chase after more: more units, more internships, more money… the list goes on. As good as dedication is, it’s important to remember to stop and smell the roses. I always knew I was lucky, but making myself aware allowed me to approach each day with a more positive attitude. 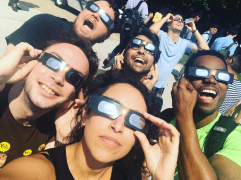 The MBA Boardroom
Scroll to top