On November 20th, 2017, the Accelerate Leadership Center and Tepper Women in Business (TWIB) jointly presented a community conversation about Gender in the Workplace, focused around the controversial internal Google opinion memo written in July 2017.

Their varying perspectives were insightful and helpful to better form make sense of this scandal. Kicking off the conversation, Leanne Meyer expressed her dismay that Google fired the author and missed their opportunity to have an open conversation about it. Neil Walker-Neveras remarked that perhaps that Google made the conscious decision to move forward quickly, and let someone else have that discussion.

Regardless of Google’s right or wrong decision, this memo launched many questions: How should we think about gender at work, as an individual, male and/ or female… and as a part of our Tepper and work communities? How do we separate facts about gender differences from the skewed, sexist opinions?

Professor Glick laid it out clearly, “With gender, there are potentially differences that have evolved but it’s very much not settled science. We are very far from linking this to occupational preferences and abilities.” He continued, “This narrative of evolved is exaggerating science when it comes to abilities. You can just as easily spin it the other way [about men].”

So how do we change false misconceptions? Through our conversation, I learned that there’s not an easy answer. Men and women both need to champion female career development through equal opportunity and equal feedback. Diversity efforts should be coupled with inclusion efforts, or else they can backfire and isolate the majority.

We have a long way to go but it will undoubtedly prove to be worthwhile. Mr. Walker-Neveras gave many examples of female leadership talent from his Deloitte experiences and summed up succinctly, “Gender balance enriches leadership decisions.”

Christina Wang | MBA 2020 (Part-Time On-Campus)
Senior Planner at Bayer HealthCare
Christina is a first-year part-time MBA student at Tepper. She hails from Philadelphia and has a degree in supply chain from Penn State University (We Are!). Christina enjoys running/dancing for philanthropy, traveling, baking carrot cakes, and catching music acts at Mr. Smalls Theater. 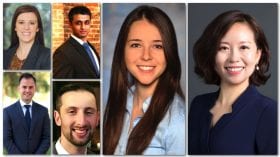